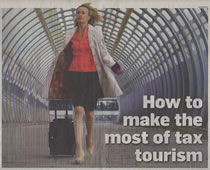 Accountants are being kept busy finding places to which Britain's tax exiles can relocate, writes Elizabeth Colman (The Sunday Times 01.11.2009)

There are lucrative income tax breaks available to residents of France, which allow individu­als to work in the UK for longer than 90 days.
Caroline Cohen, of The French Law Practice, said: "Since 2008 President Sarkozy has been making changes to tax laws to attract more people to France."

A total exemption from income tax applies to resident salaried employees and direc­tors who spend more than 120 days a year outside France devel­oping the company's business for income earned while out­side the country. The company must be based in France or another EU country.

David Anderson of Sykes Anderson, a London law firm, said: "It's a very popular wheeze. The exemption applies for work done outside France that can be described roughly as 'commercial marketing' for the company. However, it is always advisable to get clear­ance from the French authori­ties before relying on it."

This work typically involves sales and marketing but could include, say, installing IT. The from tax extends to bonuses paid in cash or as part of a company share scheme.

Taking advantage of it will involve becoming non-resident in the UK. You could get caught by UK taxes if you spend more than 90 days in Britain but advisers said that in many cas­es the double-taxation treaty between Britain and France will apply, in which case, you will not have to pay tax.

There are further benefits. French income tax is charged at up to 40% for residents but you are taxed as a household. This means your income is add­ed to that of your spouse and children, and then the total is split into equal parts with each taxed at the personal rate.

Anderson said: "You can each take advantage of your tax-free personal allowance, which applies on the first €5,875 (£5,265) and lower tax rates which apply on lower bands of income."

You are recommended to seek professional advice before taking or refraining from taking any actions based on the contents of these publications.

Tax law is subject to change.